Irish Literature in the British Context—Voices from Kyoto

講演タイトル："'Little read by sane folk': the fate of Ulysses in 20s and 30s Ireland".

calamitous Civil War. Given the political unrest in the newly-forming Irish

State whose very existence was at risk, it is not surprising that this

difficult, modernist novel, which challenged so many of the political and

the most part with hostility or indifference. Few copies of Joyce's great

"little read by sane folk"). However a number of writers and critics, mostly

impatient with the claustrophobic cultural scene in an increasingly

provincial Ireland, looked warmly to Ulysses as a work of inspiration and

even liberation. They braved the conservative status quo in order to attempt

and influence - his fellow Irish people, whom he hoped to help see

themselves and their limits by reading his fiction. The talk will look at

the efforts of Joyce's fellow author, Padraic Colum, of Mary Colum, an

important but often forgotten Irish critic (and a rare female one, at the

time), as well as a handful of other intellectuals and writers, such as

Eimear O'Duffy, W.B. Yeats, and P.S. O'Hegarty who praised his work against

a backdrop of indifference. Despite the best efforts, however, Joyce would

have to wait many more decades, before Ulysses would be adequately

appreciated in his native land.

講演タイトル："Joyce's many paths to Ulysses"

This is an introductory lecture which shows how Joyce gathered the material for Ulysses in both at home in Dublin and in exile in his adopted home in Trieste. It will discuss the importance of exile for Joyce, look at how he transformed his vision of Dublin in Dubliners from that of a paralysed city to the more expansive and cosmopolitan city evoked in Ulysses. It will situate Joyce's work within the contexts of the Irish Revival and of European modernism.

Professor McCourt is the author of Joyce in Context (2014), Roll Away the Real World: James Joyce and Cinema (2010), The Years of Bloom: James Joyce in Trieste, 1904-1920 (2000), James Joyce a Passionate Exile (1999), and many other articles and references on Joyce. He is one of the founding members of Trieste Joyce School. He taught at University of Rome and now teaches at University of Macerata (Universita di Macerata), Italy. Kyoko Miyata published her Japanese translation of The Years of Bloom with Suiseisha last year. （『ブルームの歳月――トリエステのジェイムズ・ジョイス 1904-1920』宮田恭子訳、水声社、2017年）

2017年5月12日（金）に京都ノートルダム女子大学にて、ジャン＝ミシェル・ラバテ氏による公開講座「ジョイス、アイリッシュ・モダニズムから未来の記録（アーカイヴ）へ Joyce, from Irish Modernism to an Archive of the Future」が開催されます（右の画像をクリックすると、イベントポスターを拡大してご覧になれます／スマートフォン表示では画面を下にスクロールすると画像が表示されます）。 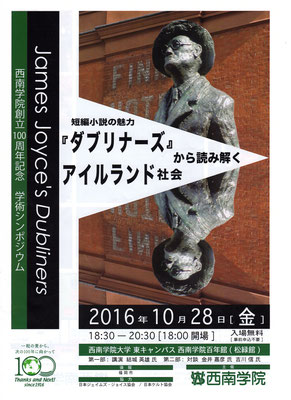 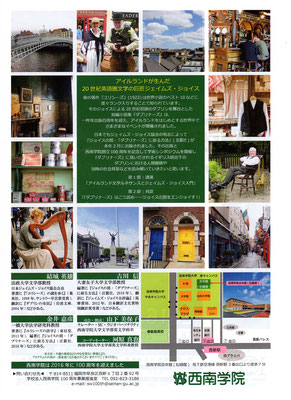 Copyright © 2016 The James Joyce Society of Japan all rights reserved.